To answer your questions

Tips for you, for them

First year of your dog’s life

Recommended Protocol for the First Year of Your Dog’s Life

VACCINATION: Although the schedule may vary, it is very important to follow a schedule for your puppy’s first vaccines. Here’s a typical “puppy shot” series to help you schedule the vaccines, including the series during their first several months of life:

One month later (at 16 weeks): Second DHPP booster, Leptospirosis booster, Rabies vaccine and, if needed, the Bordetella (kennel cough) vaccine, which is normally for puppies and/or dogs taking obedience classes or going into boarding.

One year later: the DHPP vaccine is given along with Rabies, Leptospirosis and Bordetella.

DEWORMING: During the first exam, your veterinarian will prescribe a deworming treatment that will cover the majority of intestinal parasites. You will have to repeat the treatment in two weeks time. Afterwards it is strongly recommended to deworm your puppy once every two weeks until 12 weeks of age and once a month until 6 months. Depending on your pet’s lifestyle and your veterinarian’s recommendations, the treatment may vary from 1 to 4 times a year.

FLEA AND HEARTWORM PREVENTION: The recommended testing time is beginning of April to the end of May and could be done at other times in the year but may not be as effective. We recommend that your dog be tested every 2 years to assure that the treatment is well absorbed and is working well for your dog.

The heartworm test also screens for the presence of the Borrelia burgdorferi bacteria which causes Lyme disease. This disease is spreading and becoming more common in our area; it is often transmitted by the bite of an infected tick.

After the test, the veterinarian will prescribe a treatment for your dog. There are different types of medication, from pills to topical solutions, all are administered once a month from beginning of June to beginning of November. The decision as to which medication best suits you and your animal should be made with the help of your veterinarian.

STERILISATION: According to new studies, waiting between 8 and 12 months to spay or neuter your pet could reduce the risk of urinary incontinence, orthopedic problems and the development of certain cancers in large breed dogs, as for small breed dogs, to ensure that retained baby teeth can be diagnosed and paired with the sterilization anesthesia. The decision of when to spay or neuter your pet is one you should make with your veterinarian based on race, size, and lifestyle.

Included in all spaying of female dogs, because the surgery is longer for females, are intravenous fluids which will help eliminate the anesthetics used during the operation from their system more quickly and they will receive an analgesic during surgery and for at least 4 days post-surgery.

We also offer a pre-anaesthetic blood test, done the morning of the surgery. This helps to verify that the internal organs (liver, kidneys…) are healthy, that the animal is able to withstand the anesthesia and at the same time reduce some anaesthetic risks.

First year of your cat’s life 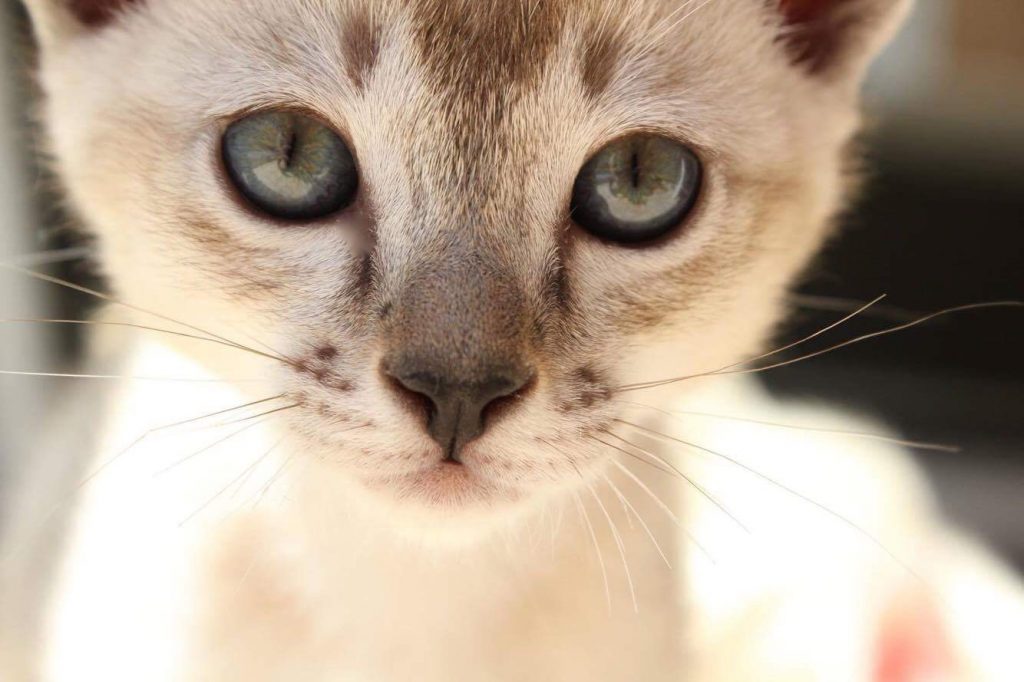 Recommended protocol for the first year of your cat’s life

Even though the calendar varies during the year, it is very important to follow a schedule for your kitten’s first vaccines.

Your kitten should receive 3 doses of vaccine in it’s first year, here’s a plan to help schedule the vaccines:

During the first exam your veterinarian will prescribe a deworming treatment that will cover the majority of intestinal parasites. You will have to repeat the treatment in two weeks. After the first two treatments, it is strongly recommended that you deworm your animal 1 to 4 times a year, depending on your pet’s lifestyle and on your veterinarian’s recommendations.

There are many treatments available to help prevent flea infestations. Discuss with your veterinarian which is best for you and your animal. The time to start treatment is usually in June and carries on until November or the first frost.

Cats can be sterilized from the age of 5 months.

Intravenous fluids are included in all sterilisations of female cats because the surgery takes longer than for males. This helps to eliminate the anaesthetics used during the operation from their system more rapidly. They will also receive an analgesic during and for at least four days following the surgery (males, for two days).

We also offer a pre-anaesthetic blood test, done the morning of the surgery. This helps us to verify that the internal organs (liver, kidneys…) are healthy and able to withstand the anaesthetic.

* Your animal needs to be up to date with its vaccines before being hospitalized. 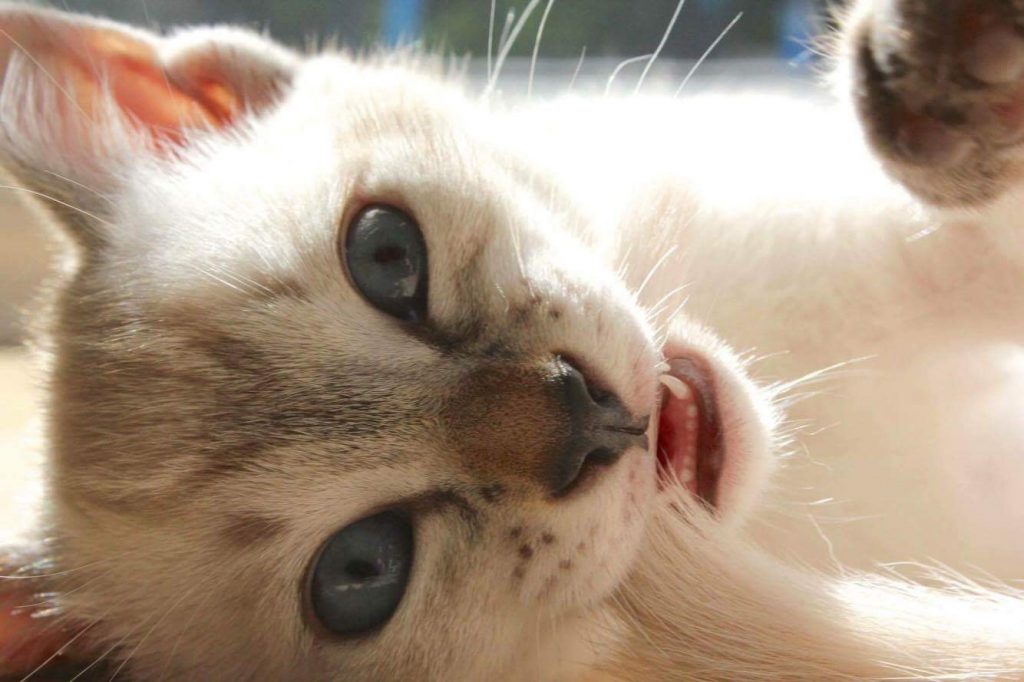 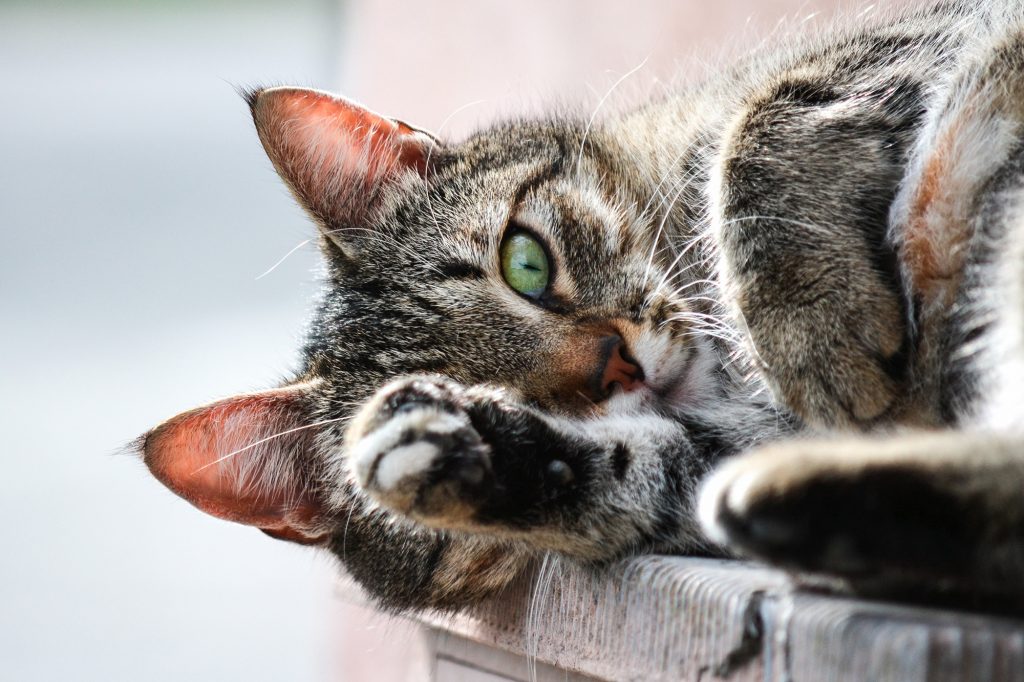 Declawing in the cat is a surgery that involves amputation of the first phalanx of its fingers. The goal here is not to make you react by comparing these shocking images of such amputation. The goal is first and foremost to explain that there are other options than this surgery.

Reasons to make their claws:

There are two methods to prevent cats from clawing on our property.
Within 5 days:

In 10 days: (if your pet has already spoiled a place)

The post should be high enough so that your cat can lie down full length to stretch its spine.

Material: The pole must be covered with material that has a texture that your cat likes, such as carpet, rope, cardboard and wood. Make him discover the joys of planting his claws by playing with a toy on the scribbler or by putting a little cat grass there.

Location: a visible place, like the entrance to a room to show that it is its territory (for example on the side of a couch at the entrance of the living room).

Stability: The pole must be as stable as a tree. N.B: Cats are more attracted to vertical lines that mimic the lines of trees, which is why they are often attracted to wooden door frames.

NB: If a cat has already damaged a wooden structure or a cloth with its claws, the simple view of the vertical striations made by its claws will cause it to start again. It is therefore necessary to eliminate any apparent damage.

The soft paws
A very interesting alternative to declawing is the installation of claw covers such as Soft Paws. These claw covers are easily applicable and cover the sharp point of the claw. They protect all your belongings without any problem and avoid big surgery. 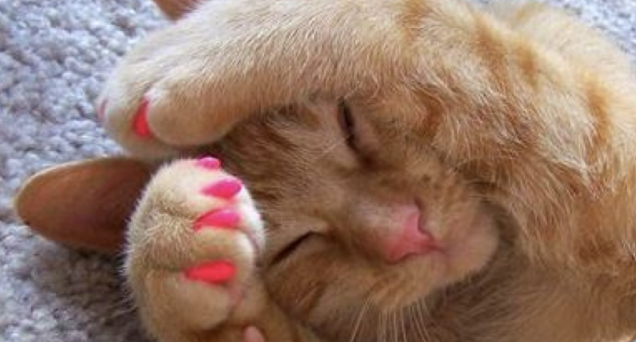 Did you know that … The risk of a cat hurting your child is much less than the risk of injury with a bicycle. Declawing is illegal in more than 39 countries around the world, as in Australia, Brazil and most European countries. In some countries, repeat offenders are even exposed to prison sentences. Several Californian cities have also prohibited it since 2009. The consequences of surgery can be significant. There may also be potential complications (hemorrhage, infection, etc.).

How to be prepare for your appointment 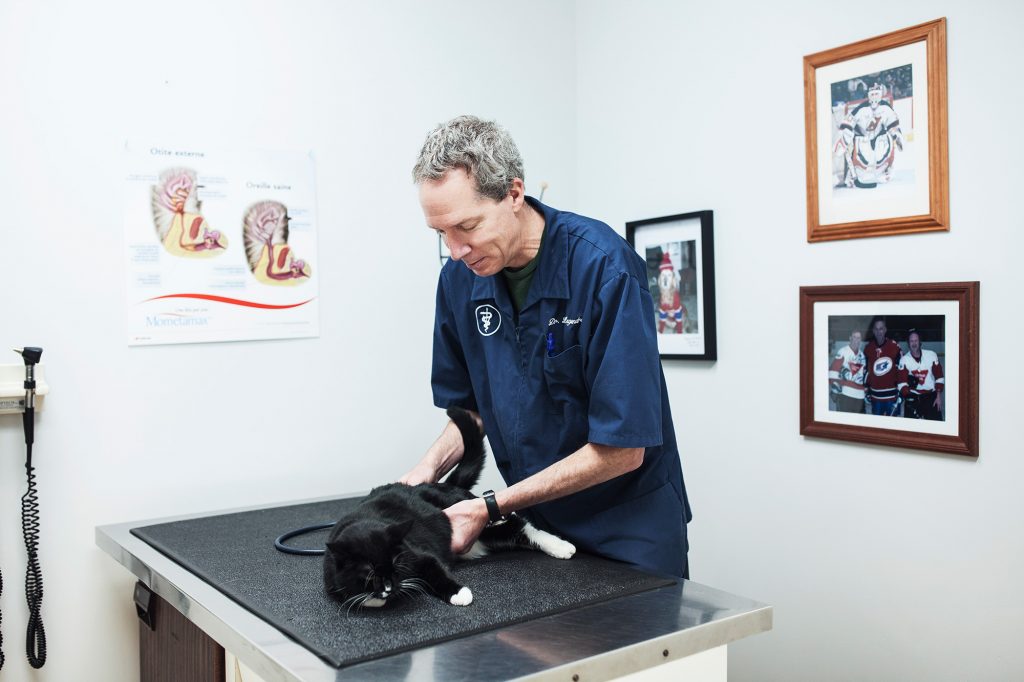 For a health problem
Fill in the form by clicking here 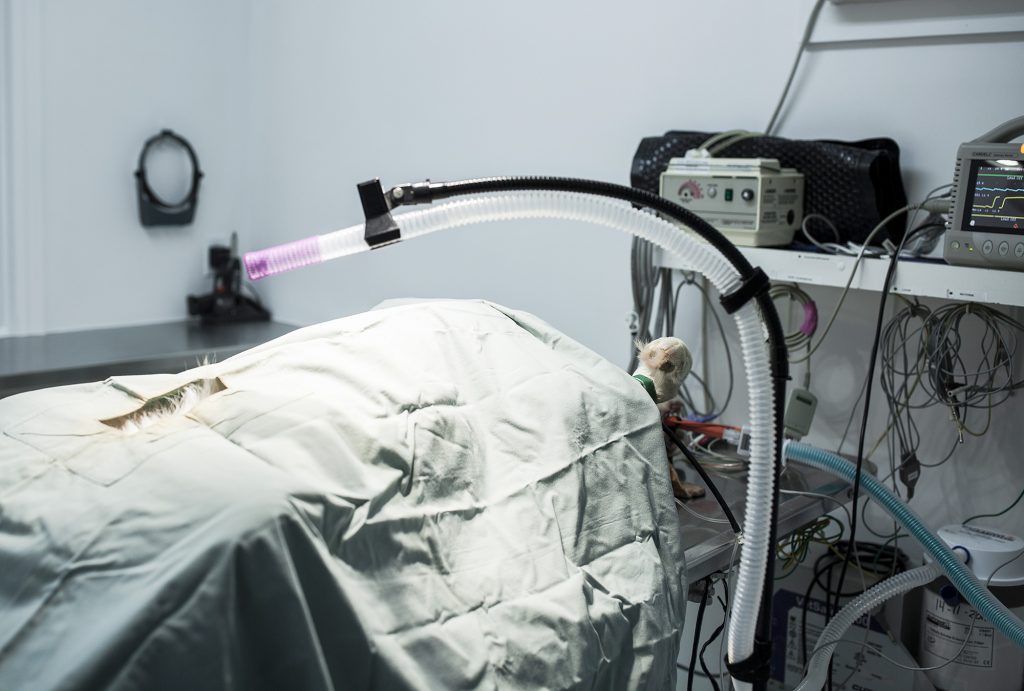 Sterilisation *To be hospitalized, your pet must have received its vaccines at least 10 days before the intervention. You need to remove your pet’s food between 19-20h the night before. You can leave its water available. You need to bring your animal between 8:30-9h.

The technician will receive you to get some information like the weight, the temperature and to confirm the procedure that is desired. She will verify if there is an umbilical hernia, dewclaws on the back paws or residual baby teeth that need to be taken care of during the intervention. She will explain and ask about pre-anaesthetic blood tests and lasers surgery. Before leaving, make sure to take your appointment for the post-surgical recommendations with the technician. Thereafter, your pet will be taken to the preoperative room. The technician will take blood if needed and do the test on site. The veterinarian will do a check-up to make sure your animal is healthy and will prescribe the appropriate anaesthetic protocol.

Since the surgical intervention on female dogs and cats is longer, inter-venous fluids will be installed to maintain adequate blood pressure during surgery. A sedation and pain relief drugs will be given 30 to 45 min. before the intervention. Then it will be given drugs to put it under, which will enable us to install an endotracheal tube in order to maintain it with a general anaesthetic gas during surgery.

As soon as the surgery is finished, we stop the gas and your pet will wake up slowly. Some animals will be able to leave the same evening under the veterinarian consent. When picking up your pet, you will encounter the technician which will give you post-operative recommendations.

Surgery of a cruciate ligament

For the surgery of a cruciate ligament

How to collect an urine sample

How to collect an urine sample from your dog
What you need: A clean container without any residue or a plastic ladle bought at the dollar store. Pour some boiling water in order to kill as much bacteria before collecting the urine. Sterile container that your veterinarian has provided.

Collection method : The urine sample needs to be fresh. There should be no more than 6hrs between collection and analysis. Try to collect the sample when your animal has a full bladder for example: Right after waking up. Thus, it will have a big urge to urinate and will not pay attention to what you are doing. It is often easier when you are two peaple. One person holds the leash and the other fellow behind. When your animal stars to urinate, discretly put the container under it to collect the urine. Transfer the urine in the sterile container. We just need around 10 ml. If you can’t brind the sample within the hour please put it in the refrigirator.

How to collect an urine sample from your cat
The veterinarian has left you a collection kit. You need to empty  your cat’s the litter box. It needs to be well cleaned and desinfected. It cannot have any remaining litter dust. Empty the beads in the clean litter box. As soon as your cat urinates, collect the urine with the pipette and transfer it in the sterile container. Bring us the sample as soon as possible. The urine sample needs to be fresh. There should be no more than 6hrs between collection and analysis. If you can’t brind the sample within the hour please put it in the refrigirator